EM360
Categories
Home Somewhere Over the Rainbow - Alcatel-Lucent Enterprise's Move to the Cloud by...

This article originally appeared on the BC Strategies portal, where Jon Arnold is a BC Expert.

I recently attended my first Alcatel-Lucent Enterprise event in far-away, uber-luxe Monaco. The analyst event was actually a coda to a week-long sales event which we didn’t attend, with the overall focus being a celebration of the company’s centenary.

As telecom entities go, other than Ericsson, I can’t think of anyone else on the vendor side in our space who has made it to 100 – with most or all of their original name/brand intact – so it really is pretty special. Perhaps that explains the lavish setting, which we analysts were more than willing to oblige. To be fair, it’s also low season in Monaco, so this is probably a great time to go there.

Speaking of brand survival, ALE’s recent history sure has been interesting. The mainstay Alcatel name is gone following the acquisition by Nokia in 2016 – which also included Bell Labs – but a modified version lives on as Alcatel-Lucent Enterprise. Brand-wise, it’s worth noting that the Lucent part of ALE is largely in namesake only. I’ve never understood why, but I suspect the brand recognition is still strong – especially in association with Bell Labs – and maybe it helps them win business in North America.

All that said, the whole ball of wax has been in Chinese hands since Huaxin acquired ALE in 2014. In some ways, the company has gone through more change in the last 10 years than the preceding 90 years, but that’s really not so unusual in the tech world.

Making the move to the cloud

Change happens for a reason, and one of those reasons is not keeping pace with change. All the big telecom vendors have struggled with the advent of VoIP, the Web, mobility and of course, the cloud. As we learned at the event, ALE certainly has a storied history of both invention and innovation.

Two examples really stand out for me, with the first being the invention of the private telephone in 1919 by Aaron Weil, one of the company’s founders. I’m curious to learn more, but I can’t seem to find details about him online at the moment. However, COO Matthieu Destot did add something else of note in that Aaron Weil’s invention was sold as a subscription service, so the company has some pretty good ideas about how to monetize their technology. A second and more familiar invention was Minitel, which may well have been the most important forerunner to the Internet. Definitely a wayback machine reference, but it shows the kind of vision that keeps companies going from generation to generation.

Fast forward to 2019, and the Communications LOB for ALE – that’s what analysts like me focus on – remains largely driven by premises-based telephony. They are still a market leader in this space, but their quarterly updates show what every other telephony vendor is experiencing – declining line and system shipments. Being private, they don’t share revenues, so it’s hard to know what the financial impact of this trend really is.

I can’t comment on the performance of their Networking LOB, or to what extent it’s offsetting these declines, so it’s also hard to know how well ALE is performing overall. That said, there is plenty to be excited about – especially Rainbow – but given their historical pedigree as an innovator, ALE seems more of a follower now than a leader going into their second century. Yes, they have a large installed base to keep things going, and they’re a great partner for large, global enterprises, but in terms of what’s new, the story is familiar. As with all the other communications vendors, the push now is to the cloud, along with CPaaS and APIs to build value-added applications and features on top of core telephony.

These moves are all in the right direction, but at this point, they seem more about sustaining the business rather than taking it to the next level. To be fair, all vendors in this space struggle with these transitions, and it remains to be seen whether CPaaS can truly be a money-maker, and whether cloud offerings can generate enough new revenue to keep the top line growing.

Clearly, the circumstances for ALE’s future are very different now than in pre-digital times. Whereas innovation seemed to come largely from within earlier – as per the examples above – ALE is more in catch-up mode now, as everyone is doing cloud, CPaaS and APIs. After all, if ALE can’t move their end customers to the cloud fast enough, they’ll move to other vendors who can. To keep pace here, ALE looks to be relying more on partnerships than home-grown innovation, where these technologies have already been developed and built up a track record.

During the sessions, we heard about several, namely with IBM, PGi, Samsung and even Nexmo (now part of Vonage). These partnerships will certainly help get the job done, but they’re not exclusive, and don’t really present a path for creating long-term competitive advantage. On that note, I found it interesting that despite their strong market leadership position for telephony, there was no comparative discussion about the competition. Perhaps that’s just part of the French worldview, but to me it’s also a sign of how tough this market has become with the cloud’s recent ascendancy.

This brings us to Rainbow, which seems like the platform they’re riding for their second century. For the time being, it looks like this: 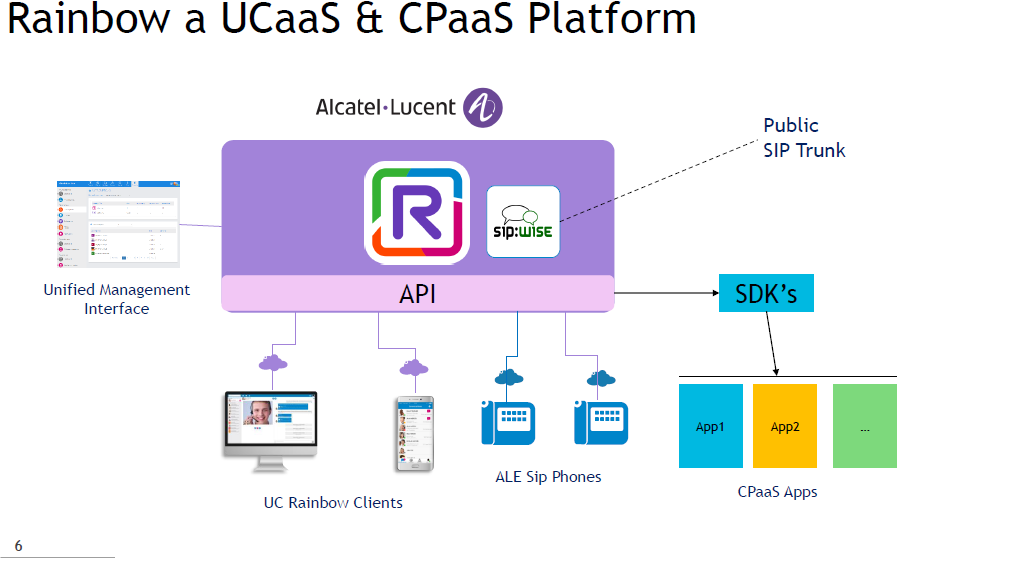 Strategy-wise, I see parallels here with Ribbon and their Kandy CPaaS platform, and so far, that company is not saying much about market traction. There’s a lot of talk about the opportunity to be realized from CPaaS, but all signs point to underwhelming revenue, so it’s reasonable to be concerned about this being the way forward for growth. Of course, it’s early days for CPaaS, so this may yet pan out, but vendors need to see results faster these days. Unlike Ribbon, ALE has at least provided some metrics with Rainbow, but the exact meaning isn’t entirely clear, and they’re not saying anything about revenues either.

What we do know is that 7,000 companies are connected to their cloud platform, and they have just passed the one million user mark for Rainbow. That user number suggests critical mass, which is great, but only about 20% are on a paid basis. Not only that, but the trend going up to 20% has plateaued, so they need some new approaches to convert more of that base to paid. Otherwise, it’s hard to see how Rainbow is going to generate enough revenues to offset the decline in premises-based PBX.

As a sidebar, their deal with Germany-based Sipwise in May 2018 is worth noting. This move helps Rainbow move beyond CPaaS to UCaaS by supporting both PSTN and SIP calls in the cloud – which is exactly what they need. While the move makes total sense, it’s interesting that ALE only took a majority stake – not a full-out acquisition – and in fact, Sipwise retains their branding. In that light, this looks more like an extension of how they’re partnering with all those other companies cited earlier.

This approach does not reflect the behavior of a top-tier who is all-in on cloud and needs to aggressively catch up to the pack. I don’t know the back story here, and have no idea if Huaxin is keeping ALE on a short leash for acquisitions. However, Sipwise is an important missing piece for Rainbow, and if I were king, I wouldn’t leave any of this to chance for competitors to potentially share.

However you choose to look at it, ALE is positioning Rainbow as their growth engine, and I sure hope they’re right. As far as I can tell, no other major vendor is giving this much prominence to what was a workstream collaboration platform, and maybe this will play out as a true form of innovation at some point. Time will tell, and to sum up overall, I left Connex19 with mixed feelings.

The premises-based business remains substantial, but the declines will continue. ALE is well-positioned in the EU and AsiaPac markets, so there’s lots of growth to pursue, but penetration remains low in North America. I have no visibility into their global strategy or Huaxin’s priorities, but the high end of North America’s enterprise market seems to play well for ALE’s core strengths. We didn’t hear about any specific strategy to address that opportunity, and perhaps that’s by design.

That aside, they face more of an existential challenge for being viewed as a telecom vendor. They know that perception needs to change, and they’re trying hard to update their portfolio with Rainbow and everything around that we heard about at Connex19. ALE certainly knows how to do voice very well, and while we did hear some references to AI and IoT – namely cognitive communications and “Cloudonomics” – I didn’t see much that takes their second century vision beyond telephony and asset protection for the PBX.

To be fair, that is what the market is willing to pay for at present, and the demand for sexy AI-driven applications remains nascent. However, the reverse case of these dynamics will likely carry the day over the next few years, and we’ll just have to see if there’s a pot of gold at the end of the Rainbow.

Enjoyed this piece? Check out our podcast on Building a Business Case for Contact Centre as a Service with Jon Arnold, Bobbi Chester, and Randy Carter

Top 10 social CIOs you need to follow on social media

How is the cloud changing business…

Could VR and AR completely transform…

How can enterprises create a connected…

How can integrated cloud apps improve…

Are your password practices as secure as you think?

WoC in Tech: The Ever-Lasting Struggle

Apple and Goldman Sachs developing a credit card, according to reports